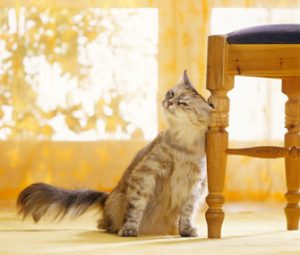 ⦁ Cats can hear sounds too faint or too high in frequency in comparison to human ears; such as those made by mice. Cats can also see in near darkness.
⦁ Cats have very few taste buds compared to humans. Domestic and wild cats share a gene mutation that leaves them with no ability to taste sweetness.
⦁ Helping them with navigation and sensation, cats have whiskers over their body which provide information on the width of gaps and on the location of objects in the dark, both by touching objects directly and by sensing air currents.
⦁ The average life expectancy for most indoor cats at birth is around 12 to 15 years.
⦁ Generally, cats sleep 12-16 hours , although some cats can sleep as much as 20 hours in a 24-hour period. The term ‘cat nap’ for a short rest refers to the cat’s tendency to fall asleep lightly for a brief period. While asleep, cats experience short periods of rapid eye movement sleep often accompanied by muscle twitches, which suggests that they are dreaming. 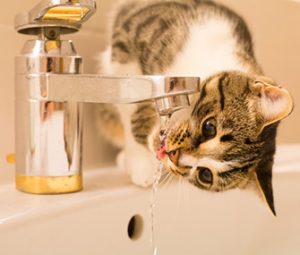 ⦁ Domestic cats use many vocalisations for communication, including grunting, purring, trilling, growling/snarling, hissing , and several different forms of meowing. In contrast to this, feral cats are generally silent.
⦁ Positions of ears and tail, relaxation of whole body, and kneading of paws, are all types of body language and all indicators of moods, including position. The tail and ears are particularly important social signal mechanisms in cats; with flattened ears indicating hostility and a raised tail acting as a friendly greeting.
⦁ High-pitched sounds house cats make to solicit food may mimic the cries of a hungry human infant, making them particularly hard for humans to ignore.
⦁ Known for their cleanliness, cats spend many hours licking their coats. If you have ever been licked by a cat, you have probably noticed that their tongues feel like sandpaper. Cats use their tongue to brush their fur and keep it smooth.
⦁ Owing to the close similarity between play and hunting, cats prefer to play with objects that resemble prey, such as small furry toys and toys that move rapidly.
⦁ The mechanism by which cats purr is elusive. The cat has no unique anatomical feature that is clearly responsible for the sound. Kittens purr to let their mother’s know that everything is ok. Adult cats purr when they feel safe and happy. Cats can purr for a long period of time without stopping.
⦁ Cats have four different meanings for “‘meow'”. Listening carefully, you can hear that each meow is different: 1. I’m hungry!, 2. I want attention!, 3. Help! and 4. I want to go out!
⦁ When cats roll over on their backs when they see you,this is probably the friendliest thing a cat can do. It’s a way of saying ‘I trust you’.
⦁ Cats often press against you with their paws. Kittens get milk by nursing from their mother. They press against their mother with one paw and then the other. This is called “kneading”. Kneading helps the mother cat give milk to the kittens. When adult cats knead with their paws, it reminds them of their mother when they were a kitten.
⦁ Cats rub up against your leg to make you smell like them. The more you smell like them the more they like being around you. Also, they are letting other cats know that you are their own special friend. They are depositing their scent, or marking their territory, on you. A cat will rub its h 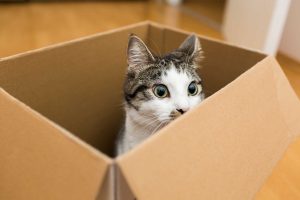 ead or the side of its chin against you, the furniture, or any object. Cats have glands on their forehead, chin mouth and that produce pheromones and they transfer these onto objects.
⦁ Cats sometimes make mad dashes around the house. This is because they have piled-up energy that needs to be released. Their instincts also make them want to hunt and run.
⦁ A plant that cats love to smell; catnip, often stuffed in many cat toys. Why does catnip make cats act crazy? It is a response to the herb’s chemical. Catnip produces feelings of ecstasy through the odour.
⦁ Can cat be trained tricks? Cats are not like dogs, but they can understand many human words and commands. Many common tricks that cats can learn are ring the doorbell, turn on a tap and retrieving a ball.
⦁ 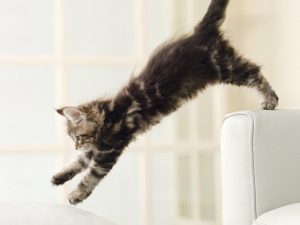 Are cats smart? In the animal kingdom, the cat’s IQ is surpassed only by chimps and monkeys. Cats think and adapt to changing circumstances and learn by observation, imitation, and trial and error. Interestingly, cats seem to learn more quickly from their own mothers than from examples set by unrelated cats, but imitate humans. They have been shown to exhibit greater problem solving abilities than dogs.
⦁ Why do cats wag their tails from side to side? The tail moving from side to side in a gentle manner means contentment. If the cat is sitting quietly, she might be focused on something. Fast, whipping back and forth could be annoyance or anger. Tail wagging in between these descriptions could mean an indecisive feeling .
⦁ Why do cats love boxes so much? When cats explore, one thing they are looking for is a potential hiding space. The experience of jumping and sliding into a box resonates with their instinct to find protected spaces out in the wild where they are able to see their environment without being seen.