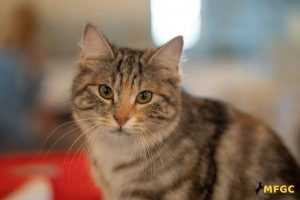 The Kurilian Bobtail is a natural breed, descendant of ancient tailless felines that inhabited Iturup and Kunashir islands off Russia before XVIII.

A medium-sized, compact feline with well-developed (prominent) muscles and a look of a wild animal. All Kurilians are known for their expertise in jumping, still the most distinct feature of the breed is of course is the tail – short, either bent or curled, evenly coated in longer (2-5 inches) fur. The Kurilian Bobtail is available in a shorthair coat too. But the semi long or medium long fur is fine. The undercoat is well developed and dense. Length of the coat increases to the lower part of the body. Full ruff, britches, and lynx tips are preferred. Coat colour can be solid, silver, tabby or bicolor but chocolate, lilac, abyssinian (ticking) and burmese are not accepted.

Despite its signature “on the wild side” appearance, Kurilian Bobtail is a warm, peaceful, yet an active and curious pet. Being such a strong and independent survivalist, this breed is not the one to nap at your knees. Feeling at home in an urban flat and gets on really well with children and other pets, as long as they are not rodents or birds as their hunters skills will come out Doglike in his devotion and docility, this bobtail would definitely usually choose the “main” owner as its master. to accompany. The Kurilian bobtail does not meow but when playing while jumping you may hear a mighty roar. Looking after a Kurilian Bobtail is an easy task, even if your bobtail is a longhair one. One should groom by brushing once a week at most with a rounded metal brush and with strokes facing the direction of fur growth.

This breed must not be mated with any other bobtail or breed. The average lifespan ranges from 15-20 years being that the breed originated in the wild and not manmade. Their diet consists of a high percentage of meat for protein, goof fats and absolutely no carbohydrates. They are a generally healthy breed with no specific illness that can be passed down thru DNA.