The Somalian breed is named after Somalia, a neighbouring state of Ethiopia. The breed itself does actually come from USA and Canada. 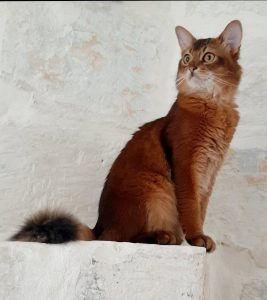 The Somali is a beautiful, truly royal feline with elongated flexible body, wedge-like head and a very fluffy tail. It resembles the Abyssinian breed  in every aspect, but the Somali has a longer hair.

The Somali weighs when becoming an adult 4-5kgs. and is rather fit for its weight and size just like the Abyssinian. The males are still slightly larger than the females. This breeds outstanding feature is its definitive feature is it’s unusual coloration, that is both iridescent, dense and warm, having no visible pattern. A coat like this may only be formed by a ticking where every hair has different colour in a number of areas. The spine, including a line running along the chord, tail tip and heels are noticeably darker, while belly, breast and inner legs are brighter. This features define their unique colour scheme.  Their coat of medium length, fine and very soft and growing shorter on the head, front legs and shoulders but it is semi long on the spine, abdomen and flanks. Mane, trousers and tail may almost be considered long. Their ticked hair has interchanging colour stripes throughout its length, counting from 3 to 8, they should always have a dark ring on the end, forming a Ticking Tabby pattern. The traditional colour for the Somali is ruddy but new accepted colours are developing. Ruddy is with dark and apricot striped hairs. Blue-gray is with cream. Sorrel is red copper, apricot and chocolate. Brown-yellow is dark cream and bright brown. 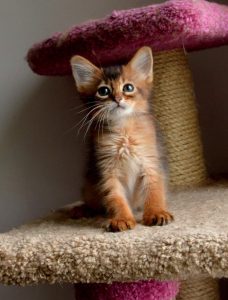 The Somali is a lively, playful and an active cat. However, it is rather calm when compared to Abyssinian, the short hair version. It is a friendly cat and it lives well with other pets, dogs and children. But not recommended to live with the Siamese & Burmese breed. Due to an acute hunter’s instinct they won’t like it in a small flat, open-air strolls are strongly recommended and Love bird watching. The Somali does prefer warmer weather. The Somali are not too tricky to look after.  Their coat won’t clot as much as some other breeds’ does buy you may want to brush regularly, on a weekly basis at least. During the shedding season, you should comb it every day.

The average lifespan of a healthy Somali is between 12-15 years.

It is also recommended that when purchasing that the parents or cat, depending on age of cat is to be tested for PKDef.