These Devon Rex felines hail from Devonshire, UK as the name suggests. 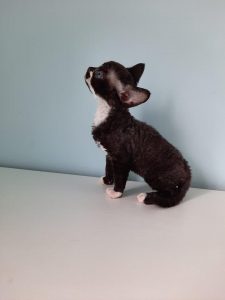 Devon Rexes are frequently called “elves among cats” for their distinct appearance. This is because the large ears that sit flat on the edges of their elliptic head, big eyes and somewhat reverse-crooked nose. Unlike other cats, the Devon Rex has short and twisted whiskers. Their legs are long and strong, their pads are small and round, and all of the above enables them to jump surprisingly high. These cats weigh up to 2.2-4 kilos and are neither large nor too small. One of their defining features is their coat, which is short, wavy and does have an undercoat. They have short, soft, thin, curly or wavy hair and resembles that of a sheep or poodle hair. Devon hair grows slow, yet is mature enough and judgeable by the age of 6 months. Apart from other rexes, these are well-built and have long, somewhat-thin legs. All colours and patterns are allowed, white can either be missing or prevailing.

Their look is just as unique as their attitude, they are unnaturally tender and require constant communication with a human, apart from which they would generally not exist. Devon cats savour physical contact with the owner and are prone to following you everywhere, sometimes even sleeping on your shoulders or on anyone else they can find. Apart from that they possess a lively and friendly character, including dogs. They adapt with no fuss to any living space including flats. Their silent and soft voice makes Devon a nice companion and will wave and bob their tail like dogs. Their close to non-existent coat poses no protection from elements so the Devon Rex are best kept indoors in warm spaces. If you have to take them somewhere through the cold, its better to dress them with nice warm knitwear. Their coat, apart from how it is described, is easy to maintain. Petting down the coat growth and washing are more than beneficial. Their ears may accumulate dirt with the time so best be to clean them with a special solution.

These cats are hypoallergenic, according to american fanciers 50 to 70% of people suffering from allergy may have a Devon Rex at home without any trouble. The Devon Rex is a hardy breed with just a few known health issues; HCM, hereditary myopathy and sunburns due to lack of hair. It is recommended that when purchasing a Devon Rex, you would research the breeder and its experience in breeding. Feeding portions consist of protein, carb free dry food, good fats and absolutely no carbohydrates as Devon Rex cannot process carbohydrates well. The average lifespan is 9-15 years.