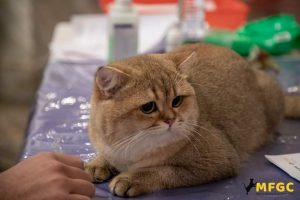 Compared to most shorthair breeds, British Shorthairs are relatively calm cats when they mature. They are easy-going in nature and talk infrequently. Very affectionate, they become quite attached to the people they own. British Shorthairs are easily trained and very adaptable. They seem to get along well with all human members of the household, regardless of age, but are usually not fond of being carried. Pets of all kinds have been kept with British Shorthairs, including dogs of all sizes, rabbits, and birds. British Shorthairs are not known for being acrobats and can tend to be clumsy at times. No breed specific, health related problems plague the British Shorthair.

A British Shorthair is a dignified, intelligent and affectionate companion. He’s not generally a lapcat, but he will want to be at your side on the sofa or at least nearby. Females tend to have a serious demeanour, while males are more happy-go-lucky. These laidback cats can get along well with dogs and are calm around children, but they don’t enjoy being hauled around. Teach children to treat them with respect.

The History of the British Shorthair

When the Romans invaded Britain, they brought cats with them to help protect their food supplies from rodents along the way. The Romans eventually left, but the cats remained behind, conquering a country with only their charm. When the breeding т pedigreed cats became a fad in Victorian England, the British Shorthair (known simply as the Shorthair in Britain) was one of the first varieties to be developed. The Longhair came about when breeders made crosses to Persians during World War I.

As with so many breeds, British Shorthairs almost died out during World War II, victims of food shortages that left breeders unable to feed their cats. After the war, the breed was revived with crosses to domestic shorthairs, Russian Blues, Persians and other cats.

The Cheshire Cat was undoubtedly a British Shorthair. These smiling cats enjoy attention, are normally quiet, but occasionally have bursts of crazed activity before changing back into your affectionate, dignified friend. They get along with children and cat-friendly dogs.

British Shorthairs are calm and undemanding. Males are big, easy lugs with a happy-go-lucky nature but a natural air of command. Females are more serious. Both want only to be with their people, not necessarily in a lap or being carried around, but next to them or in the same room with them. When you’re not home, they are satisfied to entertain themselves until you return.

This is not a very active cat. You won’t find him on top of the refrigerator but instead solidly on the floor. He is smart and will enjoy having toys to play with, especially if they are interactive.

He might be laidback, but the British Shorthair is smart. Challenge his brain and keep him interested in life by teaching him tricks and providing him with puzzle toys that will reward him with kibble or treats when he learns how to manipulate them.

Always choose a kitten from a breeder who raises litters in the home and handles them from an early age. Meet at least one and ideally both of the parents to ensure that they have nice temperaments.